Machu Picchu- The Spiritual Side of the Adventure

The year was 2014 and this was my first trip guided towards true soul searching. It was about love, breaking down, building strength through physical challenge, and releasing bad negativity that literally made my body ache. Everyone should experience the magic of this "old mountain citadel". I chose the hike through Lares Trek. It was just what I needed and truly prepared me for the following year of my life. Now, let us explore. . .

Arrival in Cuzco on Day 1 was very uneventful. This was a small group tour. I was traveling alone but as a non-pro hiker, I knew that I needed a group if I was going to hike a lot of miles a day for 3 days straight. In June, the season in Peru is winter. High in the 70's and low in upper 40's (Farenheight). In the mountains, it went as low as 16 degrees.

On the first official day of our tour, we saw a brand new baby Llama being born. Though I was able to capture the miracle some 20 seconds after, it was amazing. We visited a community of women, interacted with the locals and saw how they lived in the mountains.

Here's a photo I captured that will hopefully stir something in you. . .

And here's the newborn baby llama (or was it an Alpaca?) 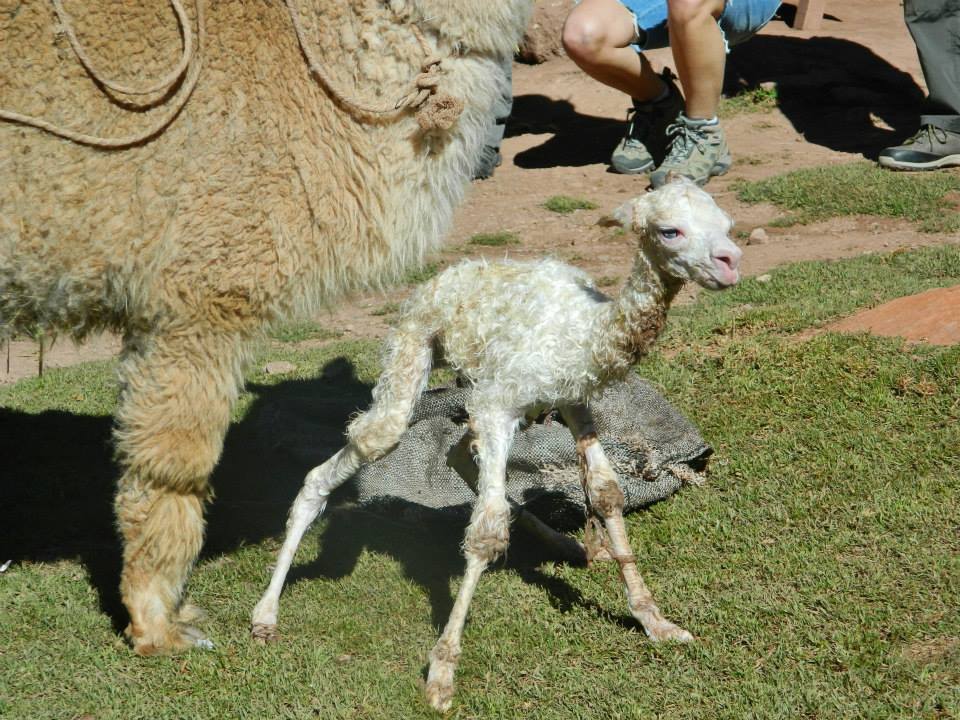 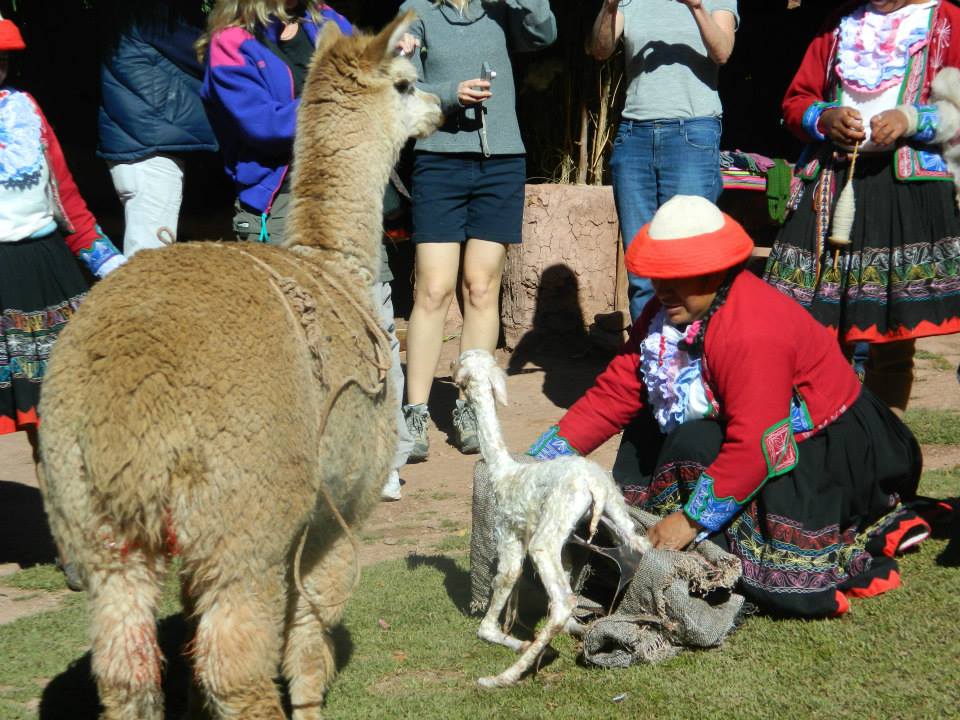 We also spent the day exploring The Sacred Valley of the Incas, such peaceful and vast scenery, surrounding the Urubamba River, with mountain peaks and villages with roaming llamas and alpacas.

At the Sacred Valley you will hear the story of the the "Temple of the Sun". A temple that claimed the lives of many as they tried to build the temple for their Gods. It is located in the NW end of the Sacred Valley.

That night as we slept in a simple hotel in Ollantaytambo, I felt a little shortness of breath. As it stands some 9,000 feet above sea level, at that point I realized that the hike that was to start the following day was going to be challenging. At this point I feel it is important to mention some essentials when you are hiking at high altitudes- lots of water (or refillable water filtered bottles), and Chloroxygen drops or hydration tablets.

Off to the Hike

Save on used and open box camping items_>>

We started the hike from Lares Town. The Lares Trek is a scenic, less crowded route to hike through the Andes. Though it is one day shorter than the Inca Trail, it is higher in elevation, and on this tour allowed us to soak in a hot spring the day before the big destination!

After about almost 6 hours hiking, we arrived at the campsite. At this point my survival mode was full on. The temperature dropped significantly and I had pulled my right groin a couple hours in. In a group of about 15 people, plus two horses; one carrying our bag packs the other in case someone needed a ride, a couple of locals assisting and carrying a tank of oxygen, I was determined to make it without additional help. The second day was an eight-hour hike and we reached Sicllaccasa Mountain (15,583 ft at high point). At this point had learned some interesting facts about Peru:

• Microclimate- Talk about bipolar weather! Literally one side of the mountain covered in ice, with the other side covered in flowers. It's spectacular. Be prepared, dress in layers!

• The Coca Leaf- It's not for everyone. I happen to be sensitive but of course I tried it. I even bought Coca candy, which you DO NOT TAKE ON THE PLANE. I didn't get busted because I was warned, and when I tried the leaf while hiking, my heart almost came out of my chest. Please try it responsibly.

• This hike is not meant to be a competition! One false step could mean a broken bone or even death. There are sections of this hike that were nothing short of dangerous. Yes, we signed a release upon our tour meeting.

"Small steps, like a turtle, they always cover a large territory" Wise words from my guide.

• Quinoa is their thing! Did you say ceviche? Nah, quinoa is huge in Peru. With every meal we had a quinoa dish, maybe a soup, mixed in salad, eaten like rice. Highly nutritious and delicious!

By the early wake of the 3rd an final hike day, there wasn't a single millimeter of my body that wasn't aching. I peeled myself from the inside of my thick sleeping bag, as I could barely see a glimpse of the sun coming up. A bowl of hot water was just outside the tent which would soon be cold. Packed up, joined the others for a hearty breakfast and a hint of my protein bar, and off we were to a six-hour hike to Aguas Calientes, where we would sleep in a bed!

Aguas Calientes is at the bottom of Machu Picchu and has the easiest access point up. The highlight upon arrival was the Hot Springs. Sulfur water with loose rocky bottom to massage your feet is a must! After that, I wanted to wander alone and so I did. Went to a great little restaurant and tried the Alpaca steak. Salty and tough it's not worth it. I didn't try the Guinea Pig either, their popular dish.

The hike was over and the destination was in front of us. We arrived for the sunrise after a very scary ride on a two-way narrow road with no railing up the mountain. The Machu Picchu was grand. We walked around in it, embedded in all that history.

Machu Picchu, the Lost City of the Incas, translates to old mountain and is one of the most visited tourist sites in the world. Containing about 10% of the fauna and 22% of the flora of Peru it is also currently one of the Seven Wonders of the World. It shows a great urban planning, interconnected with other nearby sites. The whole region is distinguished by its production of corn and potatoes. There are many theories as to the significance of the site. The most common one being that there were only about 300 people living there, and they were of high social status, and habitants were related somehow to the Inca ( the divine; the descendant of the sun-god). The Machu Picchu has a great archaeological value and a variety of ecosystems. Its location represents the former border of the Empire.

But the last couple hours is where I sat down and took it all in. To me the trip was really about the journey and not the destination.

Physical challenge can help you overcome the emotional challenges later on. To me, this journey was about determination, focus, being uncomfortable and having no choice but to keep moving, all the while surrounded by natural beauty, simplicity and astonishing accomplishment by an ancient civilization. I was with strangers in an unknown land where I barely spoke the language. Many times relying on being able to control bodily functions for hours on end as there was no bathroom in the mountains. All in all, the experience opened my eyes to things that I wanted to change, appreciate what is of true value and made me stronger.

• Lares Trek vs. The Inca Trail

Thank you for reading!Comment your thoughts! Where have you been for a spiritual journey?

Exploring Austin- Beyond the Music

Egypt on a small tour and my first solo trip!